Pregnancy test strips are used to dip into a urine sample, and are small and flexible, making them cheaper. Pregnancy test sticks on the other hand, are used with a plastic housing that supports a test strip in a urine stream, but they are more expensive than strips on their own.

Both strips and sticks use a chemical reaction to detect the pregnancy hormone, Human Chorionic Gonadotropin (hCG), in your urine. hCG, produced by the developing placenta beginning on the day on which the embryo implants in the uterine wall, is detected using monoclonal antibodies in home pregnancy test kits. The hCG levels in urine can vary greatly from one woman to the next, with more sensitive tests able to detect lower levels of hCG.

Pregnancy tests sticks are what you see most commonly associated with pregnancy testing since they’re convenient, but they’re not the only option. Digital pregnancy tests are available as a stick but are some of the more expensive tests available. a digital test will display either the words “pregnant” or “not pregnant” instead of showing two lines to indicate a positive result. They are also often less sensitive, with higher concentrations of hCG required for a definitive answer.

Pregnancy test strips are cheaper because they don’t have the additional plastic housing around them. However, they perform in the same way. When you follow the manufacturer’s instructions, the outcomes from cheaper pregnancy tests will be just as accurate as those from more expensive ones.

Should I use a pregnancy test strip, or stick?

Strips and sticks are both very accurate pregnancy tests that tell you exactly the same thing. It’s just a matter of preference as to what you like better! If you want something convenient, stick pregnancy tests will be your best bet; however, if cost is an issue for you then pregnancy test strips might be more useful.

Many mothers who are taking at-home pregnancy tests while going through IVF cycles will use the strips If they are testing frequently. It really is a matter of economy here.

It took a while for me to become pregnant, and the longer it took, the more I wanted to POAS. (Pee On A Stick) it didn’t take me very long to work out that this urge was going to cost me a lot of money, so I sourced bulk packs of testing strips instead. When I did get a BFP (Big Fat Positive) test, I used a pregnancy test stick as more of a keepsake and used a marker to write the date of the positive test on the plastic housing.

Bulk packs of home pregnancy tests are available in both strips and sticks, just keep in mind that they have an expiry date. (you’ve generally got about a year or so from the date of purchase)

If you have saved your first morning urine (FMU) so that you can take a pregnancy test with someone else who you would like to share the results with, you would have collected your sample in a cup. In this instance, the convenience benefit of using a stick is not a factor here, so going with the economical test strips instead may be a good choice.

How do you use a pregnancy test strip?

Using pregnancy test strips is very easy. You collect a sample of urine (some kids come with a cup provided for this) and dip the test strip in the sample. Be sure to make sure that you only the up the strip for the amount of time that the manufacturer states – no more and no less. It is important to follow all of the manufacturer’s instructions to get the most accurate test results.

While uncommon to be available over-the-counter, there are also pregnancy test strips that do come in a housing but are not designed to be used in a urine stream. These tests require you to user prepare or syringe to drop a certain amount of urine onto part of the strip the testing. You will more commonly see these types of tests at your doctor’s office.

There is an indicated section of the test strip where you will read the results. It is important not to get this section of the strip wet as it may impact the accuracy of the test. Wait the specified amount of time before interpreting the results – you may interpret false-negative results if you look at the test too early, or a false-positive result if you look at it after the designated time.

How do you use a pregnancy test stick?

If you are using digital tests, keep in mind that the amount of time you may need to wait for a result is often longer than a pregnancy test where you are looking for two lines to appear to confirm a positive result.

Do pregnancy test strips or sticks detect the lowest amount of hCG?

Pregnancy test sticks and strips both detect the same hormone and can detect hCG levels at the day of your expected period, as well as a number of days before your missed period. For the most part, a pregnancy test which is labeled an “early” test can detect lower levels of hCG, but it pays to do your research to make sure that they are being advertised correctly.

Which pregnancy test is most accurate?

In 2003, Consumer Reports tested a number of home pregnancy test kits. The First Response Early Result Pregnancy Test was named the most reliable and sensitive test, as it could detect the lowest amount of hCG. It detected hCG at levels as low as 6.5 mIU/ml (thousandths of a thousandth of an International Unit per milliliter), which is practically sensitive enough to detect any pregnancy soon after implantation. 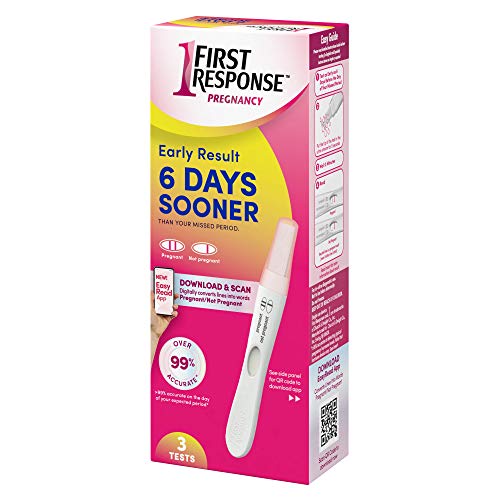 This was also backed up in a study in 2005 where the First Response Early Result Pregnancy Test had an analytical sensitivity of 6.3 mIU/mL, which was estimated to detect greater than 95% of pregnancies on the day of missed period.

When is a home pregnancy test positive?

Home pregnancy test is positive when there is enough hCG in the tested urine to trigger the required chemical reaction. hCG is produced early in pregnancy, so if you are testing for pregnancy during the first week after conception, hCG levels will be very low. It takes several days to build up enough hormone that pregnancy test can detect it accurately.

If you have a 28-day menstrual cycle, hCG may be detected in your urine 12-15 days after ovulation. A pregnancy test strip or stick may not give a positive result until around the time of your expected period. (but it can happen several days before)

Because many women have irregular cycles and may go several months between periods, 10 to 20 pregnant females out of every 100 will not realize they are pregnant on the day their missed period begins.

If cost is an issue, pregnancy tests in strip form may be your best option; however, if convenience or ease-of-use is what’s most important to you then pregnancy test sticks might be the best choice for you. It all comes down to how much money you’re willing to spend on testing as well as a personal preference with regards to how you will actually use the pregnancy test kit.

link to The 3 Best Formulas Closest to Breast Milk

Though breastfeeding is the best and most natural way to provide a baby with essential nutrients, some moms may not be able to breastfeed due to various reasons such as maternal infections, substance...

Continue Reading
link to Gumdrop Pacifier vs. Avent Soothie: What Is Better?

Babies develop a strong sucking reflex even before they are born. You might have noticed your baby suckling at their thumb in the ultrasound photos! The sucking reflex is an important way to soothe...